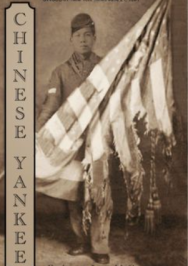 Thomas Sylvanus, a native of Hong Kong, was a

Along with his father and brothers, Elbie Garson “Gar”

Thomas Sylvanus, a native of Hong Kong, was a highly-decorated veteran of the U. S. Civil War. He was the only Chinese soldier to draw a Civil War pension. In 2005, the John T. Crawford Post, Camp 43, of the Sons of Union Veterans of the Civil War replaced Sylvanus’s weathered cemetery marker with a new stone. Sylvanus is the subject of Ruthanne Lum McCunn’s Chinese Yankee: A True Story from the Civil War (2014).
Little is known about Sylvanus’s early life or parentage. Born on July 4, 1845 in Hong Kong, he was known in his youth as Aw Yee Way. After he was orphaned, he was placed in the care of a Mrs. McClintock, who planned to educate him in the United States and send him back to China as a missionary. She was in ill health, so she turned him over to Dr. Sylvanus Mills. Dr. Mills then placed the boy in the care of his sister, Mary Duvall of Baltimore. He assumed the Sylvanus surname and took his first name, Thomas, from a sailor who had been kind to him. Unfortunately, Mrs. Duvall treated Sylvanus as a household slave. The Civil War provided him with a means of escape from the Duval home. He managed to get to Philadelphia, where he enlisted in Company D of the 81st Pennsylvania Volunteer Infantry. He was discharged due to disability, but he re-enlisted in the 51st Regiment Company D. He also served in 42nd New York Volunteer Infantry as a draftee substitute.
Sylvanus saw combat in some of the Civil War’s bloodiest battles: The Seven Days, Richmond, the Wilderness, Spotsylvania, and Cold Harbor. Wounded at Cold Harbor, he was captured and imprisoned in the notorious Andersonville Prison, where he contracted a disease that damaged his eyesight.
Sylvanus came with a friend to Indiana around 1870. He eventually opened a laundry. He supported his family but struggled with combat-related ill health, personal problems, and poverty. While in Indiana, he became active with the local post of the Grand Army of the Republic. The GAR welcomed Civil War veterans of all races. Sylvanus was well-liked and highly respected within this unit. Because of his impaired eyesight and lameness, Sylvanus was awarded a disability pension. Thomas Sylvanus died in Indiana on June 15, 1891.