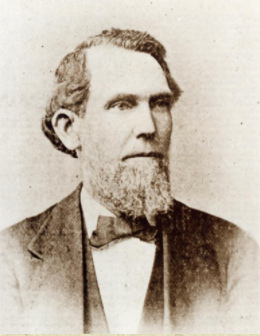 David F. Irvin was a retired Army captain and

John Sutton was a prominent merchant and civic leader from Indiana, Pennsylvania. He is recognized as the force behind the foundation of the Indiana Normal School—a teacher-training institution now known as Indiana University of Pennsylvania. He was active in a wide range of commercial, political, civic, and religious interests. He served on the Indiana Borough Council. An advocate of public education, Sutton spearheaded the effort to build an eight-room school in Indiana Borough. He saw a pressing need for teacher training. Collaborating with a group of stockholders, Sutton embarked on founding the Indiana Normal School. He sold the trustees a plot of land that he owned for $7,000. Sutton oversaw the development and operation of the Normal School, which opened officially in 1875. Its main building, designed by James W. Drum, bears John Sutton’s name and serves today as the University’s administrative center.
John Sutton was married to Mary Agnes Walker, a teacher from Canonsburg, PA. They had three children: Thomas, John Walker, and Annie Sutton. In 1876, Sutton’s health had declined. He died in Indiana on June 9, 1877. The Indiana Normal School trustees remembered him as one of the institution’s founders and “one of its first and best friends.” (Stephenson, II:92-93).