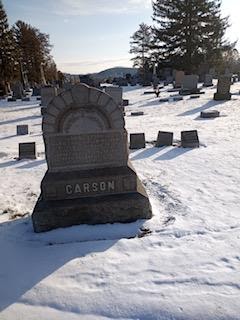 A son of J. Earl and Elvie Long Putt,

Oakland Cemetery was established in December 1863, on a buckwheat field owned by James Clark. The first burial was the infant son of the Carson family. The inscription on the marker indicates that he was the son of “J and H Carson”–John and Hannah Carson. The child’s father, John Carson, had been born in Ireland in 1815. He and his wife, a native of Harmarville, had seven children. The Carsons owned a substantial farm two miles west of Indiana. They and their other children were later buried in Oakland Cemetery. This child’s name is unknown. Thus far, no newspaper reports of his death have been located.