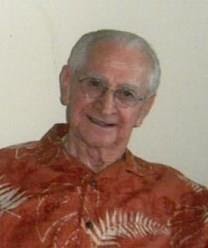 A son of J. Earl and Elvie Long Putt, Lyle Earl Putt had a long career as a realtor in the Indiana area. He established the Putt Real Estate Agency, which still serves the region. Putt was born April 15, 1921, in Cherryhill Township. He spent his early life on his father’s farm and worked at Clymer Brick Yard and C.B.C. Coal Co. He graduated from Clymer High School in 1939 and entered military service in 1944. An infantryman with the 8th Division in France, Germany, and Belgium, Putt earned three battle stars and rose to the rank of staff sergeant. After discharge in October 1945, Putt worked with the USDA Soil Conservation Service in Fulton County. During that time, he became a sales representative for the Woodmen of the World Life Insurance Society. He, his wife Jane, and their children returned to Indiana, where he became a realtor.
Lyle Putt was an active member of Grace United Methodist Church, the Indiana Country Club and the Forest Country Club in Fort Myers, Florida, where he made his winter home. He also was a past president of the Indiana Kiwanis Club and a life member of the Indiana Chapter of the American Red Cross and the VFW. He served on the Indiana County Conservation District board for 12 years and was a founding board member of the Visiting Nurse Association. He died on May 27, 2017, in Fort Myers, Florida.