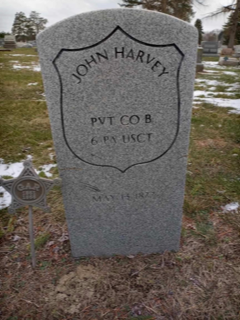 John Harvey was a veteran of the Civil War. Born in Indiana, Pennsylvania in 1837, he served in the United States Colored Troops during the Civil War.
Little is known of John Harvey’s origins or early life. But US Census records offer clues. The 1840 Census shows a “free” African-American family headed by Gabriel Harvey residing in Williamsburg, Huntingdon County, Pennsylvania. In 1850, the Harvey family, which included ten-year-old John, was living in Indiana Borough was headed by Gabriel Harvey, age 67, and Harriet Harvey—likely his mother—age 40. All had been born in Pennsylvania. The Harvey children were all enrolled in school. Interestingly, the 1850 Census shows the Harveys living next door to Dr. Robert Mitchell, an Indiana physician well known for his vigorous opposition to slavery and participation in the Underground Railroad.
By 1860, 24-year-old Harvey working as a day laborer in Indiana. He made his home with Mrs. Margaret Clark and her son. In July 1863, he traveled to Greensburg, Pennsylvania, where he joined Company B of the 6th Unit of the United States Colored Troops. Harvey was serving as a draft substitute for a man named David Porter. A substitute was typically paid $300 to enlist in another’s place.
Harvey’s Company was first dispatched to Virginia where it engaged in several operations. In late September 1864, Harvey was wounded and spent several months in the General Hospital at Fort Monroe, Virginia. By early 1865, he was able to return to his company.
After the Confederates surrendered on April 9, 1865, the War Department sent the 6th USCT to Wilmington, North Carolina. Harvey mustered out while in Wilmington on September 20, 1865, but records indicate that he was admitted to the General Hospital in Baltimore, Maryland in October 1865. It remains unclear how long he remained there. A brief notice appearing in the May 17, 1877 issue of The Indiana Democrat indicates that John Harvey died in Indiana of consumption. He was acknowledged as “a soldier in the late war” and, more specifically, as “a member of the U. S. colored troops.”