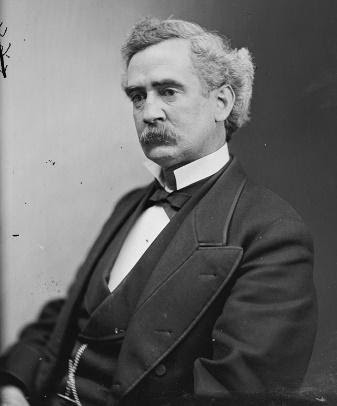 Harry White was an important figure in Indiana history. He was born in Indiana, Pennsylvania. He was born January 12, 1834, in Indiana. He was the son of attorney Thomas White and his wife Catherine Brooks McConnell—namesake of Indiana’s Mrs. C. B. M. White Building on Philadelphia Street. Harry White attended the Indiana Academy. In 1854, he graduated from Princeton and was admitted to the bar in June 1855.
In 1860, Harry White married Anna Lena Sutton (1840-1912), a daughter of Gavin and Anna Gilchrist Sutton. White served valorously during the Civil War. From December 13, 1861 to February 22, 1865, White served as major in 67th Regiment, Pennsylvania Volunteer Infantry. While serving in the military, he managed to fulfill his obligations as a member of the Pennsylvania State Senate, attending winter sessions in 1862 to 1863. On September 25, 1864, Harry White escaped as he was on his way to the notorious Andersonville prison in South Carolina. The White family was well known for their commitment to the abolition of slavery. For nearly a month after escaping from imprisonment, Harry White was hidden and cared for by Georgia slaves. President Lincoln brevetted him as a Brigadier General in March 1865.
After the Civil War, White served as a State Senator from 1865 to 1874, serving as Speaker at the close of his last term. In 1872, he was a delegate to the State Constitutional Convention. That same year, he ran unsuccessfully for the Governorship of Pennsylvania.
But, White was successful in his bid to serve in the Uniter States House of Representatives, where he served in 1876 and 1878. He was defeated in 1880. In 1884, Harry White was elected a judge of Indiana County, Pennsylvania, an office he held for the next twenty years. In 1904, he resumed his law practice. He died in Indiana, Pennsylvania, in 1920. Harry White donated a tract of wilderness land near Indiana. Today, this area is known as White’s Woods.