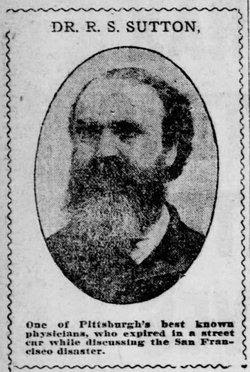 Dr. Rhoads Stansbury Sutton was a prominent physician born in Indiana, PA on July 8, 1841. According to Warner’s 1889 History of Allegheny County, Pennsylvania, he was the son of Indiana businessman James Sutton and Sarah Stansbury—the daughter of Dr. Stansbury, a surgeon on duty during the War of 1812, under Gen. William Henry Harrison, at Fort Meigs, Ohio.
Sutton received his early education at an academy presided over by Silas M. Clark and, later, at the Tuscarora Academy in Juniata County. He graduated in 1862 from Jefferson College in Canonsburg. He immediately enrolled as a medical student of Dr. D. Hayes Agnew of Philadelphia. He also studied at the University of Pennsylvania, where he earned his medical degree in 1865.
In1866, he moved to Pittsburgh, where he practiced until 1881, when he went to Europe, where he pursued special studies in Vienna, Berlin, Edinburgh, and London. Upon returning to the United States, he resumed his practice in Pittsburgh and Allegheny—now the North Side of Pittsburgh–where he was recognized as a leading practitioner. He specialized in gynecology and, for five years, maintained a private hospital in Allegheny. In 1879, the Rush Medical College of Chicago appointed Dr. Sutton a lecturer on conditions affecting women. He delivered two courses of lectures in 1880 and 1881. He later resigned to travel abroad. In 1885, Dr. Sutton received an LL. D. from Wooster University.
Throughout his career, he contributed to various medical journals and more than a dozen books pertaining to the diseases of women. For many years, he was a member of the Allegheny County Medical Society. He also helped to establish several national medical societies. Dr. Sutton served as president of the American Academy of Medicine in 1887. During the Spanish-American War, Dr. Sutton served as major chief surgeon. Dr. Sutton died suddenly on April 21, 1906, while riding in a streetcar on Fifth Avenue in Pittsburgh. He was survived by his wife, a daughter and a son.