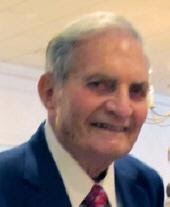 Donald Zoni was the owner of Luxenberg’s Jewelry and was credited with bringing to Indiana brands of luxury merchandise that was available in large cities. Zoni, who had owned and operated the downtown jewelry store landmark for nearly three decades, died at age 88 in Land O’ Lakes, Florida. The son of Nathan M. and Mary Davis Zoni, he was born in Squirrel Hill and graduated from Taylor Allderdice High School. During World War II, he saw extensive service as a navigator in the U.S. Army Air Corps. He guided transport planes ferrying supplies from India over the Himalaya Mountains to China to support the Chinese war effort of Chiang Kai-shek.
After the War, Zoni graduated from the University of Pittsburgh. He came to Indiana in 1962 to manage Roger’s Jewelry Store in downtown Indiana. In 1977, Zoni became the sole owner of Luxenberg’s Jewelers and retired in 2005. He was married to Dr. Carleen Zoni. He forged a strong reputation for mentoring fellow retailers and workers in his business.