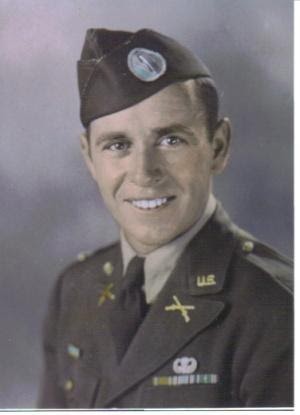 David F. Irvin was a retired Army captain and businessman. The son of James Jefferson Irvin and Jennie Rainey Irvin, he was born April 27, 1918, in Carnwath, Clearfield County. Irvin graduated in 1938 from Indiana High School. During World War II, he served with the 101st Airborne Division as a paratrooper. He saw major combat in both France during the Normandy Invasion on D-Day and in Holland, where he was wounded. For his service, he was awarded the Bronze Star and the Purple Heart. In 1946, he retired from military service at the rank of captain. After the war, Irvin joined Syntron Company, eventually becoming vice-president of its central Pennsylvania sales company. In 1955, he formed Irvin-McKelvy Company, a partnership that evolved into Indiana Steel and Fabricating Company.
He was active in numerous civic and social organizations. He served on the board of directors of First Commonwealth Financial Corporation as well as the board of National Bank of the Commonwealth. He was also one of the most senior members of Indiana Country Club, where he served on the board of governors. He was also a life member and past officer of the Allied Club. He was a life member of Elks Lodge 931 of Indiana; VFW Post 1989 of Indiana; American Legion Post 141 of Indiana; F & AM of Pennsylvania Franklin Lodge 0313; Bee Hollow Hunting Club of Clearfield; life member of the 101st Airborne Division Association; and member of Clan Irwin Association. He was a member of Grace United Methodist Church of Indiana for nearly 70 years. He was an avid golfer, gardener, traveler and reader of American and military history. He died in Indiana on January 6, 2004.