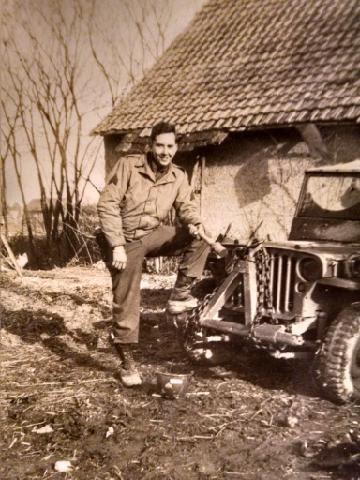 Chester “Chet” W. Spicher Jr., was an Indiana businessman and military veteran., The son of Chester W. Spicher, Sr. and Catherine Hollopeter Spicher, he was born June 28, 1925, in Indiana, PA. After graduating from Indiana High School in 1943, he served as a U.S. Army paratrooper in the European Theater. He participated in some of the most intense fighting of the war, including the Battle of the Hurtgen Forest. He rose to the rank of sergeant and was awarded numerous decorations, including two Bronze Star medals for Valor in Combat. After the War, Spicher worked at several sales jobs before partnering with his brother-in-law, J. Edgar Hines, to establish the original Outside Inn on Wayne Avenue.
Two years later, he bought out his partner and began construction of a new Outside Inn on the site currently occupied by Indiana Auto Parts. The Inn was an Indiana icon for over 40 years, offering several innovations to the restaurant business, including the famous “Blink Lights for Service” for curbside dining on trays attached to car windows. Spicher expanded his restaurant holdings to include Winky’s Drive-In Restaurant, and Pedro’s Mexican Restaurants in Indiana and State College. He expanded his interests to real estate. Spicher developed Shadowood Village off Warren Road and worked as an Indiana-based realtor for many years. He was active in a range of civic activities, which included the Indiana Optimist Club and commissioner of the Indiana Little League Program. He was a 33rd Degree Mason of the Scottish Rite of the Coudersport Consistory and a member of the Shriners’ Jaffa Mosque. He was a life member of both the VFW and American Legion.
Chester Spicher married Gertrude Jane “Trudy” Houk on February 14, 1948. The couple had four sons. He died in Grand Haven, Michigan, died on Wednesday, July 23, 2008. He was buried with full military honors.