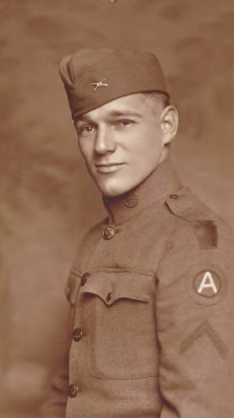 Emmett George Hoyt was best known for his valorous military service during World Wars I and II. He was born on May 28, 1895 in Sabula, Clearfield County, PA. His parents were Edson and Agnes Henderson Hoyt. He was the older brother of Theodore C. Hoyt.
In 1917, he enlisted in the US Army. As a Private in Company M, 110th Infantry, 28th Division, Pennsylvania Nation Guard, he sailed with his unit sailed to France, where saw considerable action at Aisne Marne and Meuse Argonne. He spent 57 days in the Argonne; and on June 30, he was sent to Aisne Marne, where, on July 30, he was “moderately” wounded when his legs were peppered with shrapnel. At the time, he was carrying a tin of tobacco in his breast pocket over his heart. After the battle, Hoyt credited “Prince Albert” with having saved his life. He was honorably discharged upon demobilization on May 23, 1919.
After discharge, Emmet Hoyt married Ruby Philippi. They had one daughter. He worked as a postal clerk in Ridgway, Pennsylvania. About the War, Hoyt said, “I won’t carry a gun in the next one.” This turned out to be a prophetic statement. He took advanced military courses and received a commission in the Army Reserve. During his tours of reserve duty, he commanded Civilian Conservation Corps camps in Western Pennsylvania.
Emmet Hoyt was called up for service in World War II. He participated in the Sicily, Rome Arno, and Northern Apennines campaigns. Hoyt also served in Sicily as Assistant Adjutant General in Palermo. By war’s end, he had earned the rank of Lieutenant Colonel. In 1946, he was promoted to full Colonel and retired at that rank from the Army Reserve in November 1953. He retired from the Post Office in 1955, having devoted his entire adult life to serving his country. Emmet Hoyt died on December 22, 1978 in Florida. He was survived by his wife, Ruby Philippi Hoyt, and a daughter.