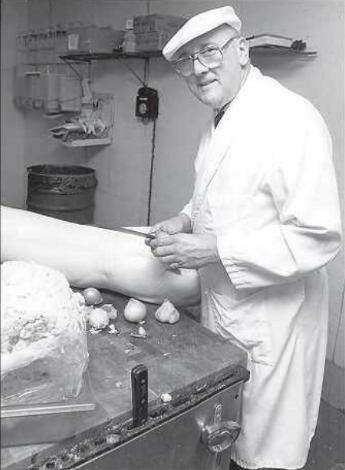 James Solomon Nance was a legendary Indiana athlete whose

Edward Bratton was described as a quiet yet powerful pillar of the Indiana community and a recipient of many awards for his consistent philanthropy to his hometown and Indiana University of Pennsylvania. He was an especially faithful supporter of Meals on Wheels, Grocers Fight Cancer, and the United Way of Indiana County. Bratton was owner and co-owner of Giant Eagle supermarkets in Indiana, White Township, Altoona, Bedford, Ebensburg and at one time in Ohio.
Born on April 26, 1928 in Irvona, Clearfield County, Ed Bratton was the son of Leroy and Evelyn Kanarr Bratton. After serving in the Marine Corps, he worked briefly on a coal strip job on his grandfather’s farm. A graduate of the National School of Meat Cutting in Toledo, Ohio, Bratton went to work for grocer Bill Steiner, whose store he eventually owned. Bratton developed several businesses out of Steiner’s Market, including catering and butchering deer in hunting seasons. He was later associated with the Giant Eagle store in Indiana.
Bratton was highly active in community projects. He conducted a major fundraiser for the local Meals on Wheels, raising $150,000 for the cause. In 2009, he donated $1 million to Indiana University of Pennsylvania’s Kovalchick Convention and Athletic Complex. The University awarded him with the President’s Medal of Distinction. Bratton also received the Bell Ringer Award, for supporting IUP’s sports programs. In 2002 and 2004 he received the American Cancer Society Excalibur Award. Bratton was a major supporter of the annual Grocers Fight Cancer event at Giant Eagle, an effort that raised approximately $500,000 for cancer research and treatment. In 2002, he was named Male Civic Leader of the Year. The Penn’s Woods Council of the Boy Scouts of America, Chestnut Ridge District also recognized him with a William Penn Distinguished Citizenship Award. Ed Bratton died on January 13, 2013, in Indiana.